I learned to play chess at the age of ten, taught by Walter, the lad next door who was eighteen months older than me. He was a studious youngster, to a greater extent than I understood at the time, and possessed a gift for explanation coupled with a precocious child’s understanding of chess strategy and tactics. I enjoyed playing with him despite the competitive streak that led to him crouching over the board in manic concentration whenever I looked like salvaging a draw.

And so it was when I arrived at Howard Gardens High School in Cardiff around my twelfth birthday I had played something like two hundred games and lost every one. As I said to the master who ran the chess club I was seeking to join, ‘I really like chess, but I am hopeless at it’. Yet within a few months I was board number two for the school, the short-trousered teammate of the lordly sixth formers who made up the rest of the team.

What I had missed out on was that Walter was a genius, and not just a chess genius. In career terms he followed a doctorate in nuclear physics at the University of Birmingham by joining the Atomic Energy Research Establishment at Harwell, where in short order he became its Director. Later he was ennobled by Margaret Thatcher and became Lord Marshall of Goring, heading the Central Electricity Generating Board and becoming famed for ‘keeping the lights on’ during the miners’ strike, thus earning himself the nickname ‘[Reich] Marshal Goering’.  A joke in poor taste I know, but some puns are irresistible.  As a chess player he was world ranked as a junior and was Welsh junior champion in his early teens. He represented Wales for a number of years as a senior.

But like so many young chess players I drifted away from the game until appointed to a chair at the University of Ulster thirty years later, where a joint staff and student team competed in cross-border competitions. This rekindled my earlier enthusiasm, so when my career took me to the University of Warwick as Professor of Arts Education I joined the local Stratford-on-Avon Club where I played for enjoyment without taking the game too seriously.

That changed when in 1992 I went to the University of the South Pacific in Fiji as head of the Education and Psychology Department. My partner did not come out to Fiji with me, resulting in the longest commute that planet Earth allows and leaving me in need of a serious hobby. This time I returned to chess with a vengeance, climbing rapidly up the ELO grading database and targeting the Fiji team for the 1994 Moscow Olympiad. In the event, after an American style all-plays-all trial, I scraped in as Board 4. The two contributing factors allowing this pleasing but limited success were the weakness in world terms of the Fiji team and that for the first time I was working with a trainer, Queensland’s formidable FIDE Candidate Master Damian Norris, who had been seconded to the tax office in Suva.  I was for a time President of the Fiji Chess Association. 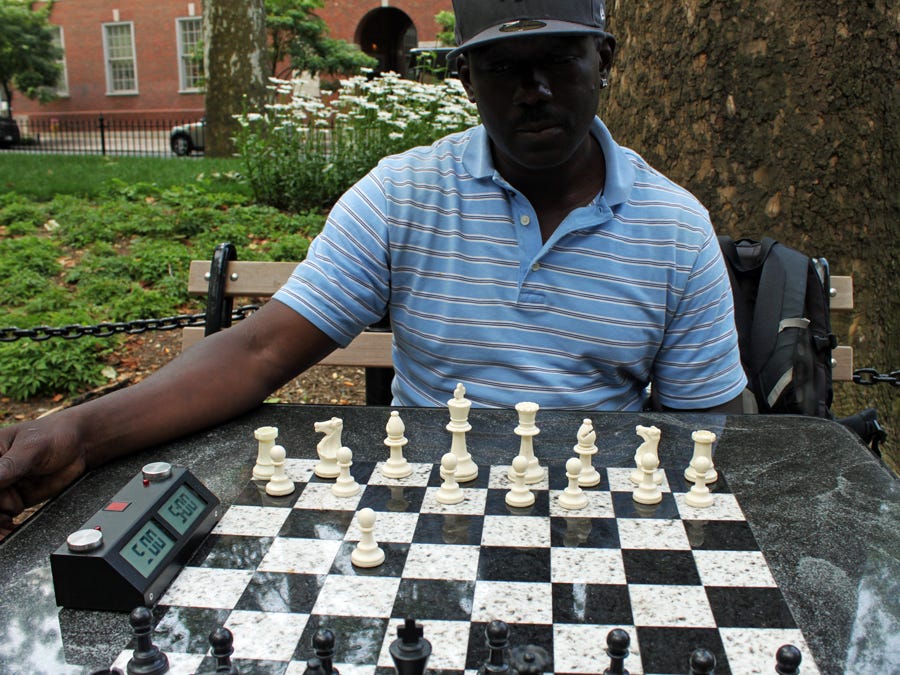 As a confirmed chessoholic I have tended recently to pick up opportunities the play wherever they have occurred. Having a mere three days to explore New York, I spent an entire afternoon with the chess hustlers in Washington Square while my partner toured the Manhatten art galleries. For obvious reasons, the hustlers tend to prefer five minutes ‘sudden death’ games and play very quickly and defensively, spurning any prospect of over-the-board victory, instead aiming to win on time. In the photograph, the suggested ‘candidate’ opening move, the indifferent  1, f4, may well be withdrawn when the clocks are set and the real game begins. It’s value is as bait to the unwary. Rather neatly, the hustlers state carefully that they never play for money but are willing to accept ‘donations’ from losers. I just about held my own but ‘donated’ anyway.

Since returning from Fiji to the UK, my chess has gradually suffered somewhat from the ravages of old age, although I have until recently just about managed to retain my place in the Cornwall County team and was for a number of years its Captain.  I have supported small village chess clubs in both Lerryn and Calstock and teach chess at the local Community Primary School. I can still manage simultaneous tournaments of up to sixteen players at middling club level and have dabbled a little in chess journalism on the Cornwall Chess website and elsewhere. I was recently elected as County President.

I am a longtime Fellow of the Royal Society of Arts, include drawing and painting among my hobbies, and currently play in league chess for Calstock and Lerryn Chess clubs.

Spurious Games is a chess-themed novel that I hope will have particular appeal to chess players, although deep familiarity with the sixty-four squares of the chess board is not a prerequisite for its enjoyment.